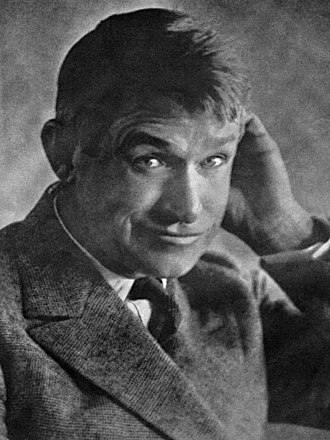 Filmplay Journal photo of Will Rogers c. 1922, by Melbourne Spurr

Will Rogers was an American cowboy, stage and film actor, vaudeville performer, humorist, newspaper columnist, and social commentator. He was Mayor of Beverly Hills, in 1928. He appeared in approximately 50 silent films and 70 talkies, as well as the Ziegfeld Follies.

He was a (mock) candidate for President of the United States in 1928.

Will was the son of Mary America (Schrimsher) and Clement Vann Rogers. He was a member of the Cherokee Nation. His father was a Cherokee senator and judge in Indian Territory. At least six of Will’s great-grandparents were of part Cherokee Native American ancestry, and one was of fully European parentage. It is not clear if his remaining great-grandparent, John Edward Gunter, had any Cherokee ancestry. Will’s other ancestry was English, with some Scottish and Welsh.

He was married to Betty Blake, with whom he had four children, including Will Rogers, Jr. (William Vann Rogers), a Democratic Party politician, who was a Member of the U.S. House of Representatives from California, from January 3, 1943 to May 23, 1944; and actor Jimmy Rogers.

Will was a first cousin, once removed, of actor Clu Gulager. Will’s mother and Clu’s paternal grandmother, Martha Lucretia Schrimsher, were sisters.

Will’s paternal grandmother was Sallie Vann (the daughter of Avery Vann and Margret/Margaret McSwain). Sallie was born in Georgia. Avery was of part Cherokee descent, the son of Clement Vann and Wa-Li Vann; Avery’s brother was Chief James Vann, a Cherokee leader. Margret was the daughter of Alexander McSwain and Nancy/Nannie Fawling Downing; Nancy’s mother, Hannah/Hanna Fawling, was Cherokee.

Will’s maternal grandfather was Martin Mathew Scrimsher (the son of Jonathan Brown Schrimsher/Scrimsher and Edith Kona Edna Vann). Martin was born in Tennessee. Jonathan was the son of John Schrimsher, who was of English and Welsh parentage, and of Anna Brown, who was English. Edith’s paternal great-grandmother, Ahneewahkee Anewake (Ahna Wakie) Ailsey, was Cherokee, as was Edith’s mother, Polly Terrapin.