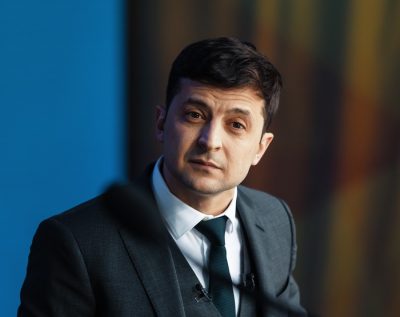 Zelenskyy in 2019, photo by palinchak/Bigstock.com

He starred on the show Servant of the People from 2015 to 2019, playing a high school history teacher who is elected the country’s President. He was subsequently elected himself in 2019.

He is the son of Rimma Vladimirovna (Osipova) Zelenska, an engineer, and Olekansder/Alexander Semenovich Zelenskyy, a professor. Both of his parents are Jewish. He is married to Olena, with whom he has two children.

Volodymyr’s maternal grandmother is Olga Solomonovna (the daughter of Solomon).

On my father’s side, my grandfather and his three brothers were all on the front [in the Red Army] in World War II and only he returned… My grandmother was living in Kryvi Rih, in a part of south Ukraine which was occupied by the fascists. They killed all the Jews who remained. She had left in an evacuation of Jews to Almaty, Kazakhstan. Many people fled to there. She studied there. She’s a teacher. After World War II, she came back. That’s where I was born… [We were] an ordinary Soviet Jewish family. Most Jewish families in the Soviet Union were not religious… religion didn’t exist in the Soviet state as such.