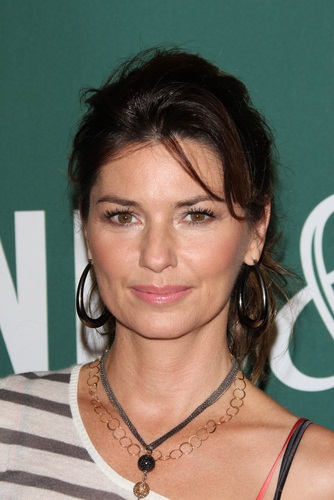 Twain in 2011, photo by s_bukley / Shutterstock.com

Shania Twain is a Canadian country pop singer and songwriter. She rose to fame in the early 1990s, with her self-titled debut album, Shania Twain (1993). She achieved worldwide success with her 1997 album, Come On Over, which became the best-selling studio album of all time by a female musician and the best selling country album of all time.

Shania is the daughter of Sharon (Morrison) and Clarence Edwards. She is of mostly Irish, Northern Irish, English, and French-Canadian ancestry. She was raised in the Ojibway First Nations culture by her stepfather, who adopted her, Jerry Twain, who is Ojibway. Her name, Shania, means “I’m on my way” in Ojibwa. Shania is married to executive Frédéric Thiébaud. She has a son with her former husband, South African record producer and songwriter Robert John “Mutt” Lange.

After her stepfather legally adopted her, Shania was eligible to hold a “status Indian” registration. As of at least 1996, she thus held a status card and was on the official band membership list of the Temagami First Nation.

Shania has evidently stated that her biological father was of part Cree Native Canadian/First Nations ancestry. It is not clear if this ancestry has been verified/documented. Some of his family members have denied it.

Shania is also sometimes said to have Swedish ancestry, somewhere on her paternal grandmother’s line. This does not appear to be accurate.

Shania’s paternal grandfather was Harold Edwards (the son of Thomas Garland Edwards and Mary Irving). Harold was born in Pembroke, Renfrew Co., Ontario, Canada, and had Irish ancestry. Thomas was the son of Jacob Edwards and Susan Kidd. Mary was the daughter of Patrick Irving and Mary Ann Howard, both of whom were born in Ontario, both of them to Irish parents.

Shania’s maternal grandfather was George Bertram Morrison (the son of James Bertram Morrison and Mary Elizabeth/Marie-Eliza Brisbois). George was born in Nipissing District, Ontario, Canada. James was the son of James Morrison, who was born in Ireland, and of Jane Donaldson. Mary Elizabeth/Marie-Eliza was of French-Canadian descent, the daughter of Moïse Brisebois and Hester/Esther Anne/Ann Firmin. Esther’s maternal great-great-great-grandfather, Sebastião Rodrigues (or Sébastien Rodrigue in French), was Portuguese, from Évora.