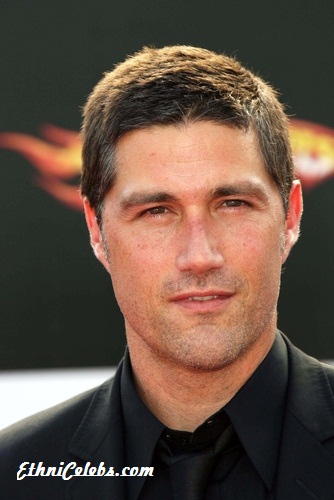 Matthew Fox is an American actor. He is known for playing Charlie Salinger on Party of Five and Dr. Jack Shephard on Lost, and co-starring in the film Speed Racer, and for many other screen roles.

Matthew is the son of Loretta and Francis Fox. His father is of mostly English ancestry, with more distant Swedish (from an ancestor named Anna Kock) and Scottish (from his McCuen line) roots. Matthew’s maternal grandfather was of Italian descent, and Matthew’s maternal grandmother had English and Irish ancestry. During his childhood, his family moved to Crowheart, Wyoming, living on the Wind River Indian Reservation. His family raised longhorn cattle and horses, and grew barley for Coors beer.

Matthew is married to Margherita Ronchi, with whom he has two children. Margherita is Italian.

Matthew’s maternal grandfather was Leonard J. Eagono (the son of Loreto Joseph Iacono/Iacone/Eagono and Restitutta “Esther” Migliacchio/Migliaccio). Leonard was born in Pennsylvania, to Italian parents. His family was from Panza, Isle of Ischia, Province of Naples, Campania. Loreto was the son of Leonardo Iacono and Maria Giovannina Filomena “Jennie” Guarriciano, whose own parents were Mattia Guarracino and Maria Rosa Polito.