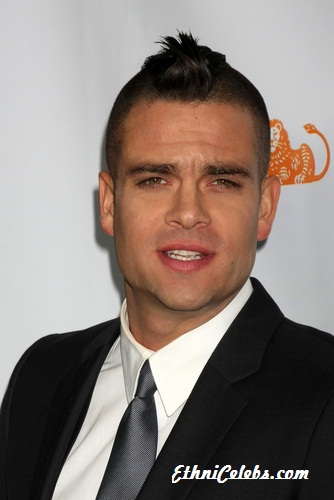 Mark Salling was an American actor and musician. His roles included the series Glee and the film Children of the Corn IV: The Gathering.

Mark had deep roots in the American South, going back to the 1600s on many lines. His ancestry included English and German, along with smaller amounts (to varying degrees) of Welsh, Scottish, Dutch, and Irish. In responding to a question about his ancestry on The Wendy Williams Show, in 2009, Mark stated, “I’m whatever you want me to be.”

Mark’s patrilineal line can be traced to Johan Pierre Salin, who was born, c. 1670, in Furth, Germany.

Mark’s paternal grandfather was John Robert Salling (the son of Minnis Theodore Salling and Harriet Alma Tucker). John was born in Ohio. Minnis was the son of John Henry Salling and Amanda Palestine White. Harriet was the daughter of Robert Bell Tucker and Elizabeth Francis Scott.

Mark’s paternal grandmother was Mildred Aline Archer (the daughter of Claude Falkner Archer and Nancy Aline McIntyre). Mildred was born in Texas. Claude was the son of James Jefferson Archer and Samantha Cooper. Nancy was the daughter of John Thomas McIntyre and Alabama Lamberth.

Mark’s maternal grandfather was Wayne Stanton Wherry (the son of Eli Herbert Wherry and Lois Estella Phare). Wayne was born in Missouri. Eli was the son of William Wherry and Isadora Telitha Matthews. Lois was the daughter of John Jay Phare and Cornelia/Kerna Lourrinda/Laurenda Shaffer.

Mark’s maternal grandmother was Cleo Bess Donelson (the daughter of Burgess Alexander/E. Donelson and Ida Dorn). Cleo was born in Texas. Burgess was the son of Aaron Taylor Donelson and Martha Leona Copeland. Ida was the daughter of John Melvin Dorn and Talva/Talvy Ann McCreless.

Sources: Genealogy of Mark Salling (focusing on his father’s side) – https://www.geni.com

Genealogy of Mark’s maternal grandfather, Wayne Stanton Wherry (focusing on his own mother’s side) – http://worldconnect.rootsweb.ancestry.com