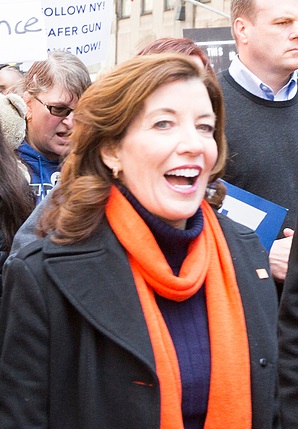 Hochul in 2018, photo by Glynnis Jones/bigstock.com

Ethnicity: Irish (at least 62.5%), along with English and German

Kathy is the daughter of Patricia Ann “Pat” (Rochford) and John P. “Jack” Courtney. Her family was working class during her childhood. Later, her father had his own technology company. Her mother founded the Kathleen Mary House, for victims of domestic violence.

Kathy is married to attorney William J. Hochul, Jr., who was U.S. Attorney for the Western District of New York, from March 15, 2010 to October 29, 2016. Kathy’s husband is of Polish descent. The couple has two children.

Kathy’s paternal grandmother was Maria/Mary Bridget Browne/Brown (the daughter of Maurice Browne and Maria Ashe). Maria was born in Kilshanig, Castlegregory, Kerry, Ireland. Maurice was the son of Catherine O’Connor.

Kathy’s maternal grandfather was Sidney William Rochford/Rockford (the son of Thomas H. Rochford and Glennie/Glendora S. Godfrey). Sidney was born in New York. Thomas was the son of Irish parents, from Sligo, John Rochford, who was born in Culdaly, Aclare, and Hannorah Conroy. Glennie was the daughter of Arthur T. Godfrey.

Kathy’s maternal grandmother was Kathleen/Katherine Letterman (the daughter of William Letterman). Kathleen was born in New York. William was the son of Kate, whose parents were German.

Genealogy of Kathy Hochul (focusing on her mother’s side) – https://www.geni.com