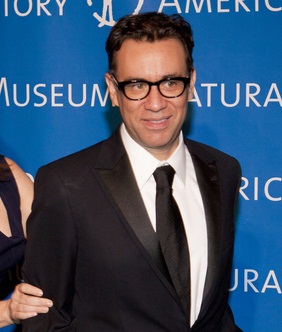 Fred was born in Hattiesburg, Mississippi, and was raised in New York City, New York. His father, Fereydun Herbert “Fred” Armisen, was born in Soltau, Lower Saxony, Germany, to a Korean father and a German mother. His mother, Hildegardt (Mirabal Level), is Venezuelan, born in San Fernando de Apure.

Fred’s paternal grandfather was a choreographer, dancer, and entertainer, known as Masami Ehara-Kuni. Masami was generally believed to be Japanese, and performed in Nazi Germany during the 1930s and 1940s. Masami has a museum dedicated to him in Japan. He may have also spied for the Japanese during World War II. Fred himself had believed that he was of Japanese descent.

The show Finding Your Roots with Henry Louis Gates, Jr. (2017) discovered that Fred’s paternal grandfather was actually born Pak Yeong-in in Ulsan, Korea. During the Japanese occupation of Korea, Fred’s grandfather had attended a Japanese school, changed his name, and took on a Japanese persona.

Fred’s Korean ancestry can be traced back 63 generations, and is believed to lead back to Pak Hyeokgeose, a monarch who founded Silla, one of the Three Kingdoms of Korea, in 57 BC.

Fred’s paternal grandmother was Gabriele Johanna Herbert (the daughter of Walter Herbert and Lina Wilhelmine Spiegel). Gabriele was German, and was born in Naumburg, Sachsen. The surname Armisen was that of a different husband of hers. Lina was born in Küstrin, An der Oder, which is now in Poland.

Genealogy of Fred Armisen (focusing on his father’s side) – http://www.geni.com