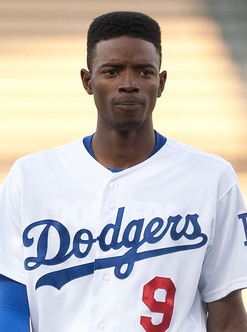 Gordon in 2011, photo by Photo Works/Bigstock.com

Dee Gordon is an American professional baseball player. He is a second baseman, shortstop, and center fielder for the Seattle Mariners of Major League Baseball (MLB).

He created Flash of Hope, a charity for children with a parent who died from domestic abuse.

Dee’s maternal grandfather is named Donald C. Strange (the son of Blanche Strange). Blanche was the daughter of Roosevelt Strange and Thelma Davis.