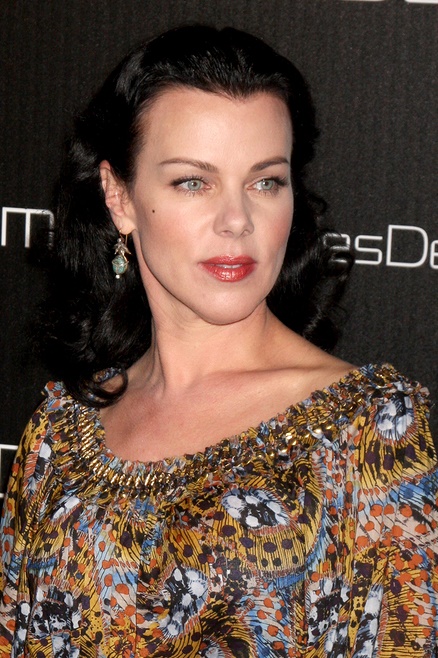 Mazar in 2010, photo by kathclick/Bigstock.com

Debi Mazar is an American actress and television personality. She started out as a B-girl in the New York hip hop scene in the early 1980s. She is known for her role as Shauna Roberts on the HBO series Entourage and for appearing on season nine of Dancing with the Stars.

Debi’s father, Harija/Harry Fogelmanis/Mazar, was born in Riga, Latvia, to a Jewish family. He was raised Catholic. He came to the U.S. after World War II.

Debi’s mother, Nancy Kapies, was born Catholic, later converted to Judaism, then became a Buddhist, and then a Jehovah’s Witness, for a time. At one point, it was stated on the internet that Debi’s mother is of Italian descent. This is not accurate.

Debi is married to Italian celebrity cook Gabriele Corcos, with whom she has two children. Gabriele is of mostly Jewish background.

Debi’s maternal grandfather was named Harry Kappes (the son of Henry A. Kappes and Myra Hayes). Debi’s grandfather Harry was born in New York. Myra’s father was Scottish and her mother was Danish.

Debi’s maternal grandmother was Evelyn Iris Smith (the daughter of William Francis Drysdale Smith and Gertrude Zimmerman). Evelyn was born in New York. Gertrude was the daughter of a German father, Wilhelm/William Zimmerman, and of a Swiss mother, Martha Kreis.

It is possible that Debi is related to actor and model Corey Fogelmanis. Debi’s father also at one point had the surname Fogelmanis, and had come to the U.S. from Latvia after World War II, like Corey’s grandfather.