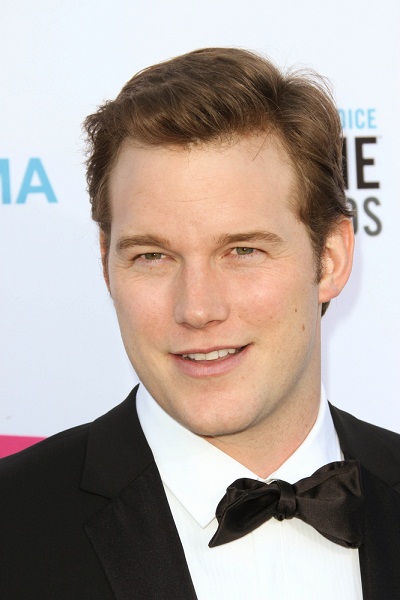 Chris Pratt is an American actor. His films include Guardians of the Galaxy, Jurassic World, the Lego series, Moneyball, 10 Years, The Magnificent Seven, Onward, and The Tomorrow War, among other works.

Chris is the son of Kathleen Louise and Daniel C. Pratt. Chris’s father was of English, Norwegian, German, Swiss-German, and French-Canadian ancestry. Chris’s mother is of entirely Norwegian descent.

Chris is married to author Katherine Schwarzenegger. He has a son with his former wife, actress Anna Faris; and two children with Katherine.

Chris’s paternal grandfather was Donald Clifton Pratt (the son of Clifton Charles Pratt and Diana Mattison). Donald was born in Wisconsin. Chris’s great-grandfather Clifton was the son of Herbert A. Pratt and Clara Harmon. Diana was the daughter of William A. Mattison/Madison and Clara Belle Hollenbeck/Hullenbach.

Chris’s paternal grandmother was Adeline Katherine Limmer (the daughter of Frederick/Fred John Limmer and Sarah Jane Roses). Adeline was born in Virginia, St. Louis, Minnesota. Frederick was born in Minnesota, and was of at least half Norwegian descent. His mother’s surname was Johnson. Sarah was born in Wisconsin. Sarah’s father, Louis Roses, was born in Switzerland, the son of Seperine Roses and Madaline, and was of Swiss-German descent. Sarah’s mother, Chris’s great-great-grandmother Zoe/Sue Beaupré, was born in Wisconsin, the daughter of Louis Beaupré and Émily/Émilie Bélanger, who were Canadian, of French-Canadian descent.

Chris’s maternal grandfather was Wallace Luverne/Laverne Indahl (the son of Willie/William H. Indahl and Inga Halverson). Wallace was born in Erskine, Polk, Minnesota. Willie was the son of Hans Martinsen Indahl/Indal, who was born in Oppland, Norway, and of Anne Karine Vetlesdatter/Vetlesen/Vetleson, who was born in Wisconsin, to Norwegian parents, from Telemark. Inga was born in Minnesota, the daughter of Robert Haukenes/Halvorsen and Augusta Iversdatter Måstad, who were both in Østfold, Norway.