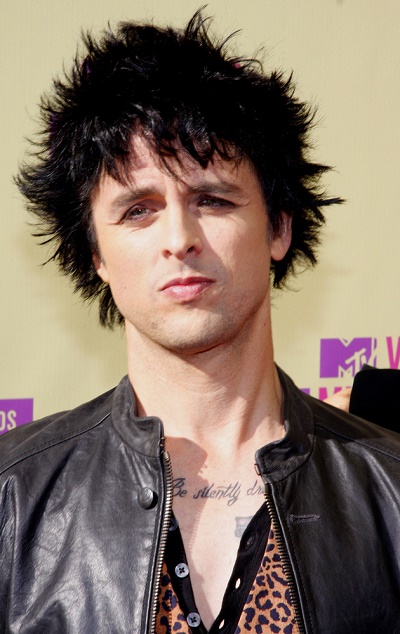 Armstrong in 2012, photo by Prphotos.com

Billie Joe Armstrong is an American singer, songwriter, musician, record producer, and actor. He is a member and lead singer of the band Green Day. Other members of the band are Mike Dirnt and Tré Cool.

Billie Joe is the son of Ollie and Andrew Marciano Armstrong. Billie Joe is married to Adrienne Nesser, with whom he has two children. Adrienne is the sister of professional skateboarder Steve Nesser. She is of Arab descent.

Billie Joe’s ancestry includes Scottish, English, Irish, Welsh, Scots-Irish/Northern Irish, 1/8th Italian [including Sicilian], at least 1/16th German, and 1/16th Spanish-Mexican. Also, one of Billie Joe’s maternal great-great-grandmothers, Margaret Ann Willey (the daughter of George Willey and Minerva/Manivery Jane Tilson/Tellesion), was said to be a Cherokee Native American. It is not clear if this has been verified/documented.

Billie Joe’s paternal grandfather was David Banks Armstrong (the son of Edwin Merritt Armstrong and Evaline Edwards). David was born in California. Edwin was born in New York, the son of Bradley Adam Armstrong and Mary Weaver. Evaline was English, and was the daughter of Mary A.

Billie Joe’s maternal grandfather was Jay William Jesse Jackson (the son of Jay Jackson and Mary/Mollie Gable). Jay was born in Texas or Missouri, to a father from Texas and a mother from Missouri.