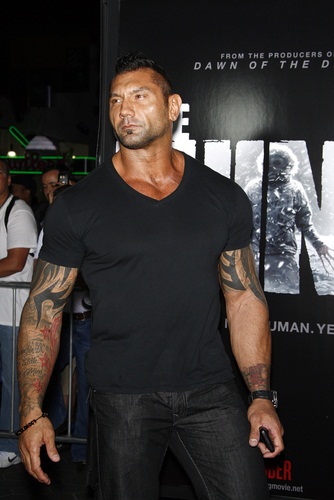 Dave is the son of Donna Raye and David Michael Bautista. His father was born in Washington, D.C., of three quarters Filipino and one quarter British Isles (English, Irish) descent. His mother is either of fully or of half Greek ancestry (it is not clear which). Dave stands 6’4″ and performs at around 290 lbs.

Dave is married to competitive pole dancer Sarah Jade. He has two children from a previous marriage.

Dave’s paternal grandmother was Rosa Trinidad Espina (the daughter of Apolonio/Paul Nasan Espina and Edna B./Mae McDonough). Rosa was born in Washington, D.C. Paul was Filipino. Edna was born in Virginia, and had Irish and English ancestry. She was the daughter of Thomas Gardner McDonough and Lily/Lillie May Beach.

Dave’s maternal grandfather was named Kenneth Mullins. He served in the marines during the Korean War, and was awarded the Purple Heart and Silver Star.