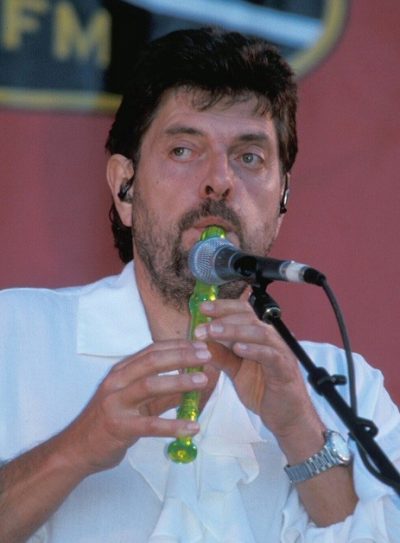 Alan Parsons is an English audio engineer, songwriter, musician, and record producer. He is known for his work with groups such as Pink Floyd and The Beatles, and for his own band, The Alan Parsons Project.

Alan is the son of Jean Kelty (MacLeod) and Denys Alexander H. Parsons. His father was a pianist, flautist, and writer. His mother was an actress, professional folk singer, and harpist. Alan is married to Lisa, and has two children. Alan is a half-first cousin, once removed, of actor Oliver Reed.

Alan’s paternal grandmother was actress Viola Tree (Viola Emmie A. Beerbohm Tree, the daughter of Sir Herbert Beerbohm Tree and Lady Helen Maud Holt). Viola was born in London, Middlesex, England. Alan’s great-grandfather Herbert was born as Herbert Draper Beerbohm in Kensington, London, England, and was a prominent actor and theatre manager. He was the son of Julius Ewald Edward Beerbohm, a corn merchant, and of Constantia Draper. He was a sibling of author/explorer Julius Beerbohm and author Constance Beerbohm, and a half-sibling of parodist and caricaturist Max Beerbohm. Alan’s great-great-grandfather Julius was of Dutch, Lithuanian, and German descent, and was the son of Ernst Heinrich Beerbohm, who was born in Memel, East Prussia, now Klaipėda, Lithuania, and of Henrietta Amalie Radke. Alan’s great-great-grandmother Constantia was English, the daughter of William Draper and Eliza.

Alan’s great-grandmother Helen Holt, an actress, was the daughter of William Holt.

Alan’s maternal grandfather was William Kelty MacLeod, 7th of Luskintyre (the son of Colonel William Kelty MacLeod, 6th of Luskyntire, and of Mary Bird). Alan’s great-grandfather William was born in Drogheda, Ireland, and was the son of Scottish parents, Alexander MacLeod, who was from Gordon Castle, Fochabers, Banff, Scotland, and is buried in Peshawar, India; and Agnes Duncan Kelty.

Sources: Genealogies of Alan’s father (focusing on his own mother’s side) – https://www.geni.com
https://gw.geneanet.org
https://wc.rootsweb.com

Genealogy of Alan’s maternal grandfather, William Kelty MacLeod, 7th of Luskintyre (focusing on his own father’s side) – http://www.clanmacfarlanegenealogy.info