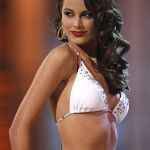 Stefanía Fernández is a Venezuelan television host, model, and beauty queen. She was Miss Venezuela 2008 and Miss Universe 2009.

Stefanía is the daughter of Nadia Vira Krupij Holojad and José Luis Fernández Acuña. Her father is of Galician Spanish descent. Her paternal grandparents moved from Nigrán, Galicia, to Venezuela, to escape the Francisco Franco dictatorship. Her mother has Russian, Ukrainian, and Polish ancestry.

Stefanía has a son with her partner, professional baseball player Ender Inciarte.

Stefanía’s maternal grandfather was Yevhen Krupij (or Eugenio Krupij Dictiac in Spanish). Yevhen was a Ukrainian, who fled the Soviet Union, to escape the Communist rule.

A picture of Stefanía’s maternal grandparents can be seen here.