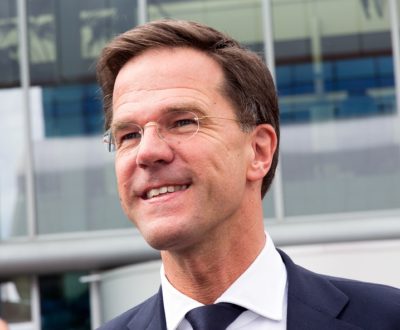 Rutte in 2015, photo by Foto VDW/Bigstock.com

Place of Birth: The Hague, Netherlands

Mark Rutte is a Dutch politician. He has been Prime Minister of the Netherlands, since 14 October, 2010, and Leader of the People’s Party for Freedom and Democracy, since 31 May, 2006. He has also been State Secretary for Education, Culture and Science, from 17 June, 2004 to 27 June, 2006.

Prime Minister Rutte is the son of Hermina Cornelia (Dilling), from Zutphen, and Izaak Rutte, a merchant, from Rotterdam.

Prime Minister Rutte’s patrilineal ancestry can be traced back to his fifth great-grandfather, Pieter Rutte.

Prime Minister Rutte’s maternal grandfather was Klaas Dilling (the son of Anthonie/Antonie Dilling and Grietje Visser). Klaas was born in Kropswolde, Hoogezand-Sappemeer, Groningen. Antonie was the son of Jan Anthoni/Antonies Dilling and Harmina Grietiens/Andries Beringa/Meringa. Grietje was the daughter of Klaas Visser and Teetje Patje.

Prime Minister Rutte’s matrilineal ancestry can be traced back to his fourth great-grandmother, Geertruida Golstein.