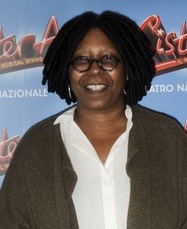 Whoopi Goldberg is an American actress, author, comedian, television personality, producer, activist, and singer. She won the Academy Award for Best Supporting Actress for Ghost (1990). She is also known for her roles in the films The Color Purple, Fatal Beauty, The Long Walk Home, Sister Act, Sarafina!, Made in America, Boys on the Side, Ghosts of Mississippi, and For Colored Girls, and the Star Trek universe.

She was born Caryn Elaine Johnson in Manhattan, New York City, New York, to African-American parents, Emma (Harris), a nurse and teacher, and Robert James Johnson, Jr., a clergyman. She has a daughter, actress and producer Alex Martin, with her former husband Alvin Martin.

In the past, Whoopi has often stated that she is Jewish, that her mother was Jewish, or that she has some semblance of Jewish ancestry on her mother’s side, or other variations on the premise. It appears that these statements were not correct; Goldberg is a stage name that Whoopi selected. She has no verified/documented Jewish ancestry, nor does it appear that she has converted to Judaism.

Whoopi’s paternal grandfather was Robert Johnson (the son of John Paul Johnson and Estella/Estelle Sherman). Robert was born in Georgia. John was the son of Alex Johnson and Quilley Williams.

Whoopi’s paternal grandmother was Hattie Wilson (the daughter of Ellis Wilson and Louisa Felts). Hattie was born in Georgia. Louisa was the daughter of Dallas Felts.

Whoopi’s maternal grandfather was Malakiah “Malachi” Harris (the son of James D. Harris and Clander/Clauder Washington). Malakiah was born in Palatka, Florida. Clander was the daughter of William Washington and Elsa Tucker.

A DNA test whose results were displayed on the show African American Lives (2006) stated that Whoopi’s genetic ancestry is:

In his 2009 book about the show, In Search of Our Roots: How 19 Extraordinary African Americans Reclaimed Their Past, Henry Louis Gates, Jr. wrote that Whoopi’s African DNA matches the Balanta/Bayote people of Guinea-Bissau, the Mende people of Sierra Leone, and the Kru people of Liberia.

Sources: A summary of Whoopi’s family history in In Search of Our Roots: How 19 Extraordinary African Americans Reclaimed Their Past, 2009 – http://books.google.ca