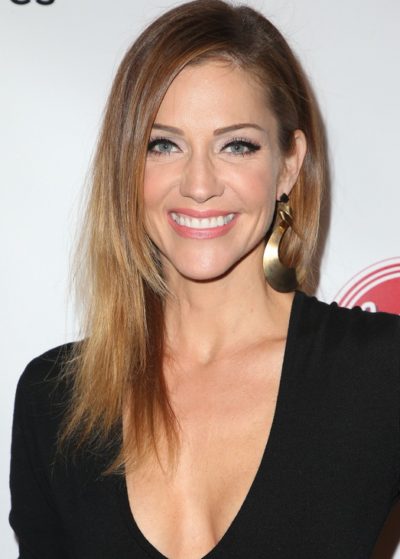 Tricia Helfer is a Canadian actress and model. She was raised on her family’s grain farm. She is known for her roles on the shows Battlestar Galactica and Lucifer.

Tricia’s paternal grandfather was Lawrence Theodore Helfer (the son of Lewis Beal Helfer and Minnie Louise Meyer). Lawrence was born in Bruning, Nebraska, U.S. Lewis was born in Kansas, the son of Jesse Helfer, whose father was German and whose mother was English, and of Sarah Ellen Smith, who had English, Scottish, and distant French, ancestry. Minnie was the daughter of Andrew/Andreas Meyer, whose parents were also German, from Prussia; and of Margreth Rothenberger, who was born in Churwalden, Grisons, Switzerland.

Tricia’s paternal grandmother was Evelyn Estella Snell (the daughter of George Milton Snell and Lucy Alice Chapman). Evelyn was born in Cereal, Alberta, Canada. George was the son of Joseph William Snell, whose father was born in Lands End, Cornwall, England, and whose mother was Scottish; and of Margaret Snell, whose father was English, from Barnstaple, Devon, and whose mother was from Kilkenny, Ireland. Tricia’s great-grandmother Lucy was the daughter of John Chapman, whose parents were from England, his father from Devonshire and his mother from Veryan, Cornwall; and of Harriet Hoare, whose parents were English.

Tricia’s maternal grandfather was Arne Leander Norman (the son of Frederick Norman and Albertina Svenson). Arne was born in Donalda, Alberta, Canada, to Swedish parents. Albertina was from Haverö, Västernorrland.

Tricia’s maternal grandmother was Alice Elizabeth Margaret Paulson (the daughter of Henry Rudie Paulson and Vera Bertha Gladys Montgomery). Alice was born in Rosalind, Alberta. Henry was born in South Dakota, U.S., the son of Ole Paulson and Ragnhild Larson, who were Norwegian emigrants, from Buskerud. Vera was the daughter of John Wesley Montgomery, who was of Northern Irish descent, and of Bertha Elizabeth Hillaby, who was of English ancestry.

Source: Genealogy of Tricia Helfer (focusing on her father’s side) – https://www.geni.com