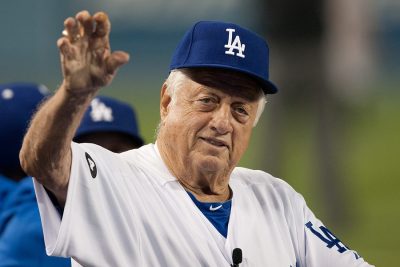 Lasorda in 2011, photo by Photo Works/Bigstock.com

Tommy Lasorda was an American professional baseball player. He was a pitcher and manager. He was inducted into the Baseball Hall of Fame, as a manager.

Tommy was the son of Carmella and Sabatino Lasorda. His parents were Italian emigrants, with his mother having been born in Tollo, Province of Chieti, Abruzzo, and his father also having roots in Tollo. He was married to Jo, with whom he had two children.

Tommy’s maternal grandfather was Tomasso/Tommaso Covatto/Covatta/Cavuto (the son of Domenico Cavuto and Carmina Sammaciccia). Tomasso was born in Tollo. Domenico was the son of Carminantonio Cavuto and Sabia Di Pietrantonio. Carmina was the daughter of Luigi Sammaciccia and Agata Radica.

Tommy’s maternal grandmother was Concetta Campagna (the daughter of Guiseppe Campagna and Anna DeClerico). Concetta was born in Tollo.