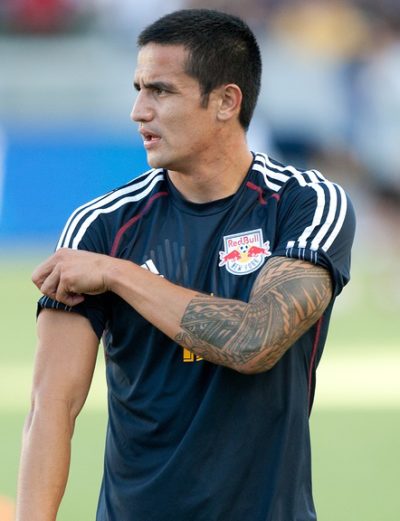 Cahill in 2014, photo by Photo Works/Bigstock.com

Tim Cahill is an Australian professional footballer. He has played as an attacking midfielder, and also as a forward, on several occasions. He is the all-time top scorer for the Australia national team.

His father is English-born, and of Irish descent, and his mother is Samoan. It is said that he has explored the option of playing for Ireland, through his Irish grandfather.

His brother is footballer Chris Cahill, who was a Samoa captain. He is also a cousin of rugby players Ben Roberts, Joe Stanley, and Jeremy Stanley, an uncle of professional rugby league players Chase Stanley and Kyle Stanley, and a relative of Rugby Union professionals Sam Stanley, Mike Stanley, Benson Stanley, and Winston Stanley. Despite growing up in a Rugby League household, Tim pursued an interest in football.

Tim is married to Rebekah Greenhill, with whom he has four children.