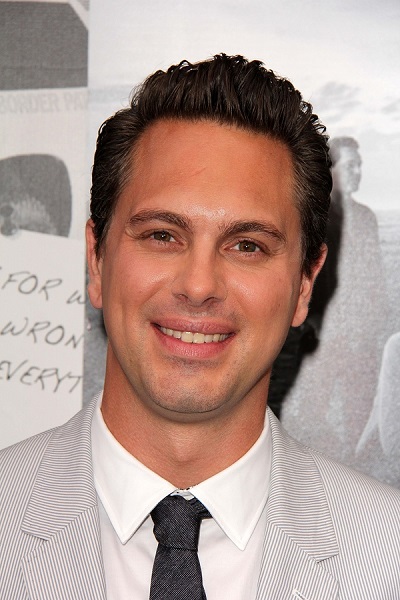 Sadoski in 2013, photo by s_bukley/Bigstock.com

Thomas Sadoski is an American actor. His father is of one half Polish, one quarter Swedish, and one quarter English [with remote Welsh], ancestry. His mother is of half Italian and half German descent.

Thomas is married to actress Amanda Seyfried, with whom he has two children.

Thomas’s paternal grandmother was Ruth E. Gustafson (the daughter of Axel Albert Gustafson and Eunice Strong). Ruth was born in Connecticut. Ruth’s re-marriage surname was Kantorski. Axel was born in New Britain, Hartford, Connecticut, to Swedish parents, Charles A. Gustafson and Christina. Eunice was born in Connecticut, the daughter of David Strong and Alice Perkins, and was of English ancestry. Eunice was descended from the Strong family, who came to the American colonies from England shortly after the Mayflower, prior to the American Revolution. Continental Army soldier Nathan Hale was a descendent of the same line of the Strong family.

Thomas’s maternal grandfather was Remigio/Remy Pietro/Peter Bove (the son of Constantino/Costantino Bove and Annunziata “Nancy” Pagano). Remigio was born in Bristol, Hartford, Connecticut, to Italian parents, from Province of Salerno, Campania. Constantino was born in Tramonti, the son of Minervini Maria Tramonti. Annunziata was born in Nocera Superiore.

Thomas’s maternal grandmother was Dorothy Mae/May Heller (the daughter of Theodore Roosevelt Heller and Minnie Alverna Troell). Dorothy was born in Freeland, Luzerne, Pennsylvania, and was of German descent. Theodore was the son of John Franklin Heller and Hannah Jane Hoffman, whose father was German. Minnie was the daughter of Alexander D. “Alex” Troell and Minnie S. Kishbaugh.

Genealogy of Thomas Sadoski (focusing on his father’s side) – https://www.geni.com