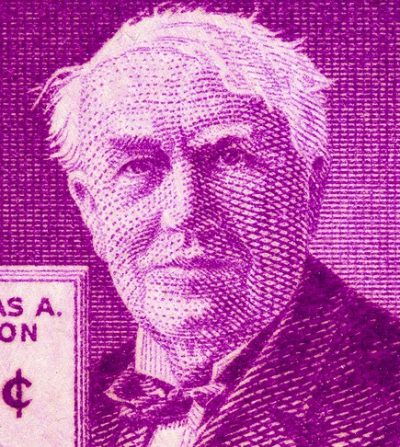 Thomas Edison was an American inventor and businessperson. He is credited for his pioneering work in electric power generation, mass communication, sound recording, and motion pictures, including the phonograph and the film picture camera, and early versions of the electric light bulb.

Thomas was the son of Nancy (Matthews Elliott) and Samuel Ogden Edison, Jr. His father was born in Marshalltown, Nova Scotia, Canada. His mother was born in Chenango County, New York. Both of his parents had significant Colonial American (English) ancestry, with roots in the U.S. going back to the early 1600s.

He was married to Mary Stilwell, until her death, and then to Mina Miller, until his death. He had three children with Mary; and three children, including politician Charles Edison and environmentalist and inventor Theodore Miller Edison, with Mina. Charles was U.S. Secretary of the Navy, from July 7, 1939 to June 24, 1940, and Governor of New Jersey, from January 21, 1941 to January 18, 1944.

Thomas’ paternal grandfather was Samuel Odgen Edison (the son of John Edison/Edeson, also known as John Marselis Edah, and of Sarah Ogden). Samuel was born in Acquackanonck, New Jersey. John was born in Belleville, Essex County, New Jersey, the son of Marselis/Marshall/Marcellus Ideson/Edeson. Sarah was the daughter of Samuel Ogden and Phebe Baldwin.

Thomas’ maternal grandfather was Ebenezer Matthews/Elliott (the son of Abner Matthews and Lois Hotchkiss). Ebenezer was born in Connecticut. Abner was the son of Caleb Matthews and Elizabeth Hotchkiss. Lois was the daughter of Obediah Hotchkiss and Eunice Beach. Elizabeth and Obediah were siblings.