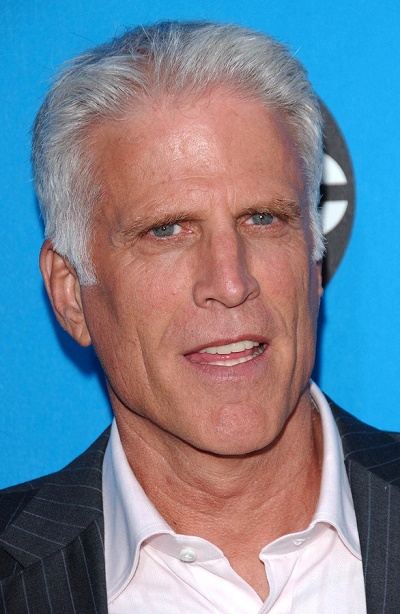 Danson in 2006, photo by s_bukley/Bigstock.com

Ted Danson is an American actor, writer, and producer. He is known for starring on the shows Cheers, Becker, as D.B. on CSI: Crime Scene Investigation and CSI: Cyber, The Good Place, and Damages, and for his roles in the films Creepshow, Three Men and a Baby, and its sequel, Three Men and a Little Lady, among other works.

Ted is the son of Jessica Harriet and Edward Bridge Danson, Jr., who was an archaeologist and director of the Museum of Northern Arizona, from 1959 to 1975. Ted was raised in Flagstaff, Arizona, at the time, and also attended school in Connecticut. He is married to actress Mary Steenburgen. He has two children with his former wife, producer Cassandra “Casey” Coates.

Ted’s paternal grandfather was Edward Bridge Danson (the son of Richard Danson and Frances “Fanny” Hickson). Edward was born in Birkenhead, Cheshire, England. Richard was the son of Edward Danson and Margaret Duckworth. Frances was the daughter of William Hickson and Elizabeth “Betsey” Mitchell.

Ted’s maternal grandmother was Mary Lucile/Lucille Johnston/Johnstone (the daughter of Calvin Knox Johnston and Harriet Emma Brace). Mary was born in Spokane, Spokane Co., Washington. Calvin was the son of Samuel Power Johnston and Eleanor Margaret “Ellen” Thompson. Ted’s great-grandmother Harriet was born in Wingham, Huron, Ontario, Canada, the daughter of Lewis John Brace, who was born in Goderich, Huron, and of Mary Jane Gibson, who was born in either England or Dublin, Ireland. Her parents, Patrick Gibson and Barbara Padden/Padan/Laten, were Irish.

A DNA test on the show Finding Your Roots with Henry Louis Gates, Jr. (2017) found that Ted has a common ancestor with comedian and show host Stephen Colbert.

Genealogy of Ted Danson (focusing on his father’s side) – https://www.wikitree.com