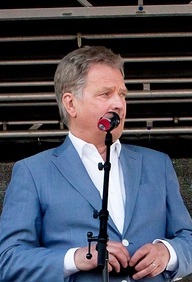 Niinistö in 2016, photo by ElenaNoeva/Bigstock.com

He is the son of Hilkka Helena (Heimo) and Väinö Pellervo Niinistö. He is married to poet Jenni Haukio. He was previously married to Marja-Leena Alanko, until her death. He has two children with Marja-Leena, and a son with Jenni.

Sauli’s matrilineal ancestry can be traced back to his sixth great-grandmother, Sofia Lahnamäki.