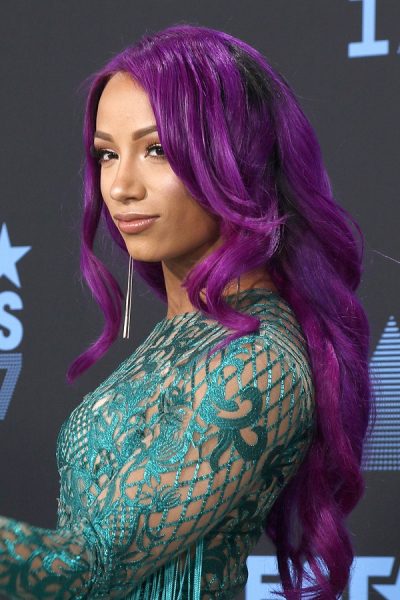 Banks in 2017, photo by kathclick/Bigstock.com

Sasha Banks is an American professional wrestler and actress. She is known as Mercedes Moné in New Japan Pro Wrestling and Stardom. She was previously signed to WWE, where she was part of the SmackDown brand, and has played Koska Reeves on The Mandalorian. She is also known as Mercedes KV and Miss Mercedes.

Sasha is the daughter of Judith and Reo Varnado. Her father is African-American. Her mother was born in Iowa, of German, and a small amount of Danish, ancestry. A picture of Sasha with her parents can be seen here. She is a first cousin of rapper, actor, and entrepreneur Snoop Dogg. Their fathers are siblings. Her father has been featured on Snoop’s television show Martha & Snoop’s Potluck Party Challenge. She is also a first cousin of hip hop producer Daz Dillinger, through his mother Allean Varnado; and is said to be a cousin of musicians/actors Brandy Norwood and Ray J, who are siblings.

Sasha is married to professional wrestler and costume designer Sarath Ton, known as Mikaze. Sarath is of Cambodian descent.

Sasha’s paternal grandmother was Minnie Felder (the daughter of Charles/Charlie/Charley Felder and Carrie Owens/Owen). Minnie was born in Mississippi.

Sasha’s maternal grandmother was named Mae Rinderknecht. Mae was born in Iowa. All of Sasha’s maternal third great-grandparents emigrated from Germany to the U.S. in the 1800s. One of Mae’s great-grandfathers, Heinrich/Henry Axelsen, was of Danish descent.

Genealogy of Sasha Banks (focusing on her father’s side) – https://www.geni.com

Genealogy of Sasha Banks (focusing on her father’s side) (through Snoop Dogg) – http://www.wargs.com