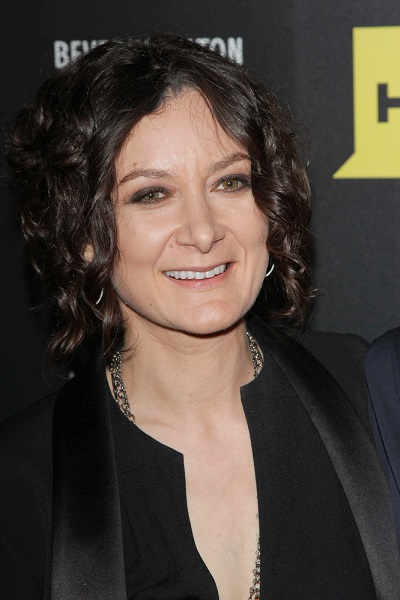 Gilbert in 2012, photo by Prphotos.com

Sara Gilbert is an American actress and television personality. She is known for her roles on the series Roseanne and The Big Bang Theory.

Sara is the daughter of Barbara and Harold Abeles. Her parents were both Jewish. Her siblings are actors Melissa Gilbert and Jonathan Gilbert. Melissa and Jonathan were adopted by Sara’s mother and her previous husband, actor and comedian Paul Gilbert (who himself was born under the name Ed McMahon). Sara also uses the surname Gilbert.

Sara is married to rock singer, songwriter, and record producer Linda Perry. She has two children with her former partner, television producer Allison Adler; and a son with Linda.

Sara’s paternal grandfather was Victor Abeles (the son of Alfred Abeles and Bertha Weinberg). Victor was born in Bohemia.

Sara’s paternal grandmother was Celia Cohen (the daughter of Abraham A. Cohen and Fanny Blow). Celia was born in England, to parents from Austria.

Sara’s maternal grandfather was Harry Crane (the son of Sam Kravitz and Sarah Peress). Harry was born in New York.

Sara’s maternal grandmother was named Julia Grandis (the daughter of Morris Grandes and Rebecca). Julia was born in Connecticut, to parents who were born in Russia, with some ancestors who lived in Belarus. Morris was the son of Louis Grandes, from Minsk, Belarus, and of Freida Shachar/Shakar.

Genealogy of Sara Gilbert (focusing on her mother’s side) – https://www.geni.com