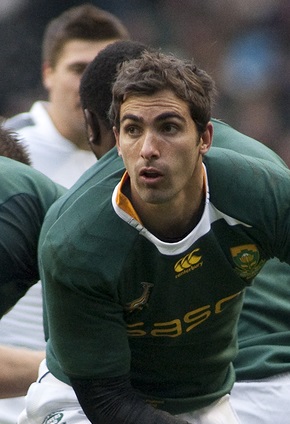 Pienaar in 2010, photo by sportsphotographer.eu/bigstockphoto.com

Ruan Pienaar is a South African rugby union footballer. He has played 88 Test Matches for his country, and was part of the 2007 Rugby World Cup-winning team.

Ruan’s patrilineal line can be traced to French Huguenot emigrants, Jacques Pinard, who was born, c. 1666, in Nantes, Pays de la Loire, France, and to his wife Hester Foucher.