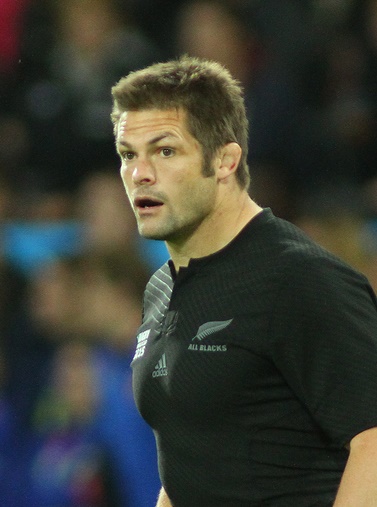 McCaw in 2015, photo by sportsphotographer.eu/Bigstock.com

Richie McCaw is a New Zealand rugby union player. He captained the All Blacks, the country’s national team, in 110 out of his 148 test matches. He is the most capped test rugby player of all time. Richie is married to hockey player Gemma Flynn, with whom he has a daughter.

Richie’s paternal grandfather was James Hugh McCaw (the son of Alexander Cartwright McCaw and Marjorie Gertrude Field). James was born in Oamaru, Otago, New Zealand, and was a Flight Lieutenant of the Royal New Zealand Air Force during World War II. Alexander was the son of Alexander McCaw, who was born in Kirkoswald, South Ayrshire, Scotland, and of Sarah Annette Seth-Smith. Marjorie was the daughter of James Strickland Field and Gertrude Brodrick.

Richie’s paternal grandmother was Catherine Margaret McLeod (the daughter of John Trotter and Isabel Minnie McLeod). John was the son of Robert William Trotter, from Ross-shire, Scotland, and of Catherine Jane Ramsay, whose parents were from Sandwick, Shetland, Scotland. Isabel was the daughter of Peter George McLeod, who was from Islay, Scotland, and of Margaret Cornwall Muir, whose parents were Scottish, her father from Glenluce and her mother from Minnigaff.

Sources: Genealogy of Richie McCaw (focusing on his father’s side) – http://www.geni.com