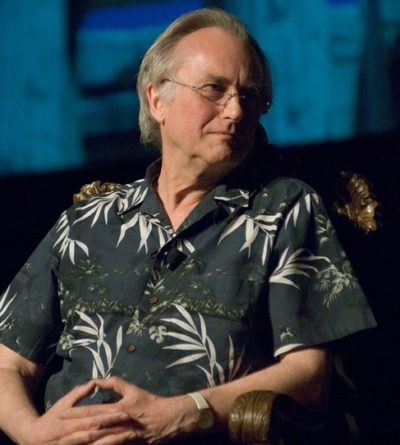 Dawkins in 2009, photo by Christopher Halloran/Bigstock.com

He is the son of Jean Mary Vyvyan (Ladner) and Clinton John Dawkins. Richard’s father was born in Mandalay, Burma, and was the descendant of many English colonial officers and servants of the British Empire, including slave owners. Richard’s mother was of five eighths Cornish descent.

Richard has a daughter with his former wife Eve Barham.

Richard’s maternal grandparents lived in Mullion, Cornwall, and Richard often visited them on holidays as a child.

Richard’s paternal grandfather was Clinton George/John Evelyn Dawkins (the son of Francis Henry Dawkins and Alice Clara Tufnell). Francis was the son of Clinton George Augustus Dawkins and Marianne Jane Robarts, who was born in Macao. Alice was the daughter of George Cressner Tufnell and Gratiana Fanny Hughes.

Richard’s maternal grandfather was Alan Wilfred/Wilfrid “Bill” Ladner (the son of James William Ladner and Harriet Merritt). James was born in Teddington, England, to a Cornish father, John Ladner, and to an English mother, Mary Ann Munton. Harriet was English, born in Brixton, England, the daughter of William Merritt and Sarah.

Richard’s maternal grandmother was Constance “Connie” Wearne (the daughter of Walter Wearne and Mary Mannell Michell). Constance was Cornish, born in Helston, Cornwall, England. Walter was the son of James Wearne and Phillippa/Philippa Vivian. Mary was the daughter of William Michell and Grace Mannell.

In his book An Appetite for Wonder: The Making of a Scientist, 2013, Richard wrote:

My mother’s family came from Cornwall. Her mother, Connie Wearne, was the daughter and grand-daughter of Helston doctors (as a child I imagined them both as Dr Livesey in Treasure Island). She was herself fiercely Cornish, referring to the English as ‘foreigners’.