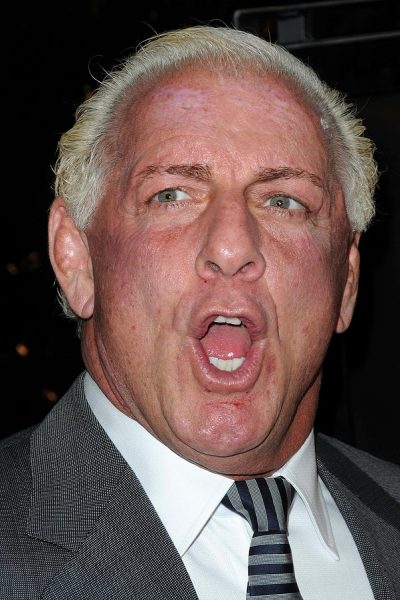 Flair in 2008, photo by s_bukley/Bigstock.com

Ric was adopted by Kathleen, who worked for the Minneapolis Star Tribune, and Richard Reid Fliehr, who worked in obstetrics and gynecology. He was raised mostly in Edina, Minnesota. According to his autobiography, To Be the Man, 2004, his biological parents were Olive and Luther Phillips. His birth name was Fred Phillips, Demaree, or Stewart. Olive’s surname was one of the three names. Ric was adopted from the Tennessee Children’s Home Society, which was later revealed to be an illegal baby trafficking operation. Phillips is typically an English or Welsh name. Demaree is typically a French name. Stewart is typically a Scottish name.

Ric’s adoptive mother Kathleen was the daughter of Frederick E. Kinsmiller and Haedwig/Hattie A. Friske, who both emigrated to the U.S. from Germany. Ric’s adoptive father Richard was the son of William Harvey Fliehr, who was born in Pennsylvania, of German, Swiss-German, English, Dutch, and French descent, and Anna R. Kaiser, who was born in New Jersey, of German, English, Dutch, Scottish, and Welsh ancestry. Richard descended from settlers in Colonial America. Some of Richard’s German ancestors emigrated from Alsace, France.

Sources: Excerpt from Ric’s autobiography, To Be the Man, 2004 – https://www.simonandschuster.com