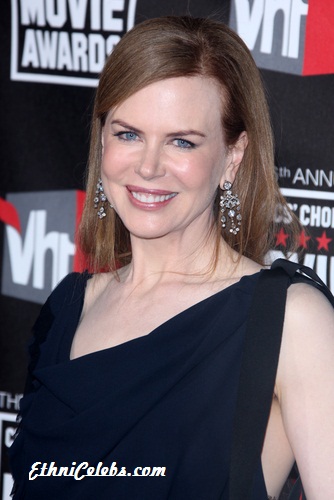 Nicole Kidman is an Australian actress, film producer, and singer. She won the Academy Award for Best Actress for The Hours (2002). She has also starred in Dead Calm, Days of Thunder, Batman Forever, To Die For, Moulin Rouge!, The Others, Australia, Rabbit Hole, Lion, and Being the Ricardos, among many other roles.

Nicole was born in Honolulu, Hawaii, U.S., to Australian parents, Janelle Ann (Glenny), a nursing instructor, and Antony Kidman (Antony David Kidman), a psychologist, biochemist, and academic. She was raised in Sydney, Australia. She has dual citizenship in Australia and the U.S. Her sister, Antonia Kidman, is a journalist and television presenter.

Nicole’s ancestry includes English, Scottish, and Irish. Her great-great-great-grandparents were among the many Irish people who escaped the Great Famine in Ireland in the 1800s. Having been born in Hawaii, Nicole was given the Hawaiian name Hōkūlani. The name was inspired by a baby elephant born around that time at the Honolulu Zoo. Hōkūlani means “Heavenly Star” in Hawaiian.

Nicole’s patrilineal ancestry traces to Kitson Kidman, who was born, c. 1724, in Comberton, Cambridgeshire, England, the son of William Kidman and Ann Kitson.

Nicole’s maternal grandmother was Gertrude Joyce Hurst (the daughter of James Hurst and May Thornton). James was the son of English parents, James Hurst and Ann Eastham.