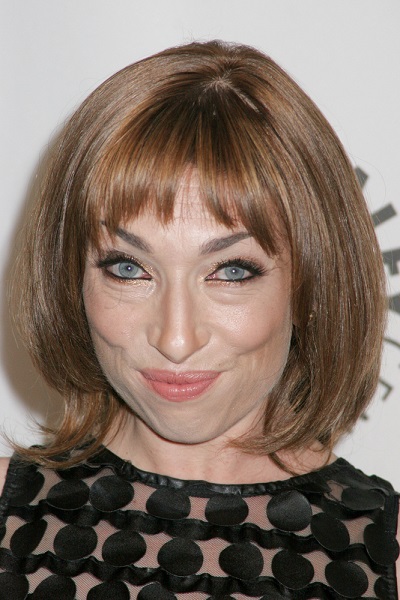 Grossman in 2013, photo by Prphotos.com

Naomi Grossman is an American comedian, actress, writer, and producer.

Naomi’s paternal grandfather was Theodore/Theodor A. A. Grossman (the son of Abraham Joseph Grossman and Jeannette/Jeanette Sachs). Theodore was born in Wisconsin. Abraham was a Lithuanian Jewish immigrant, the son of Louis Leib Grossman and Chasya/Jessie Rosin. Jeannette was also Jewish, the daughter of Barnet Mayor Sachs and Betsy Gettleson/Gettelson.

Naomi’s paternal grandmother was Ruth E. Swab (the daughter of Samuel Martin Swab and Runeor Genevieve Jones). Ruth was born in New Mexico. Samuel was the son of William H. Swab and Hannah Marie Rairigh, and had German ancestry. Runeor was the daughter of Thomas Evan Jones, who was of Welsh descent, and of Sarah Greek McAnulty.

Naomi’s maternal grandmother was Harriet Nelle Olson (the daughter of Martin Gustave Olson and Edith Hulda Wright). Harriet was born in North Dakota. Martin was born in Wisconsin, to Norwegian parents, Gabriel Olsen and Else Mathea/Matthea Guiliksdatter. Edith was the daughter of Myron Jerome Wright and Nellie Cornelia Fosdick.

Sources: Genealogy of Naomi Grossman (focusing on her father’s side) – https://www.geni.com

Genealogy of Naomi’s father (focusing on his mother’s side) – http://familytreemaker.genealogy.com