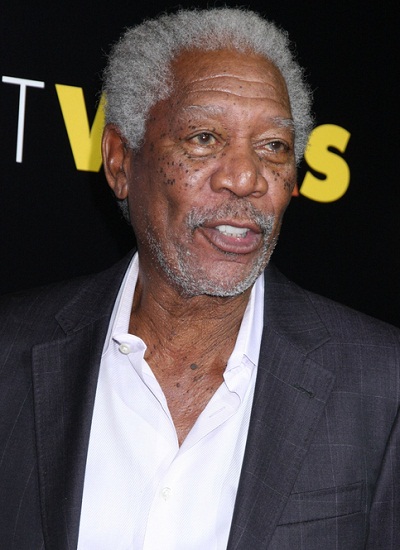 Freeman in 2013, photo by Prphotos

Morgan Freeman is an American actor, narrator, director, and producer. He won the Academy Award for Best Supporting Actor for Million Dollar Baby (2004).

Morgan is the son of Mayme Edna (Revere) and Morgan Porterfield Freeman. His parents were both black. He has four children, including actor Alfonso Freeman.

While he is usually stated as having been born in Memphis, Tennessee, Morgan’s listing on the 1940 U.S. Census states that he was born in Mississippi, where his parents were from.

Morgan’s maternal great-great-grandfather, Alfred Carr, was a caucasian man (with English ancestry) who had eight children with Morgan’s black great-great-grandmother, Celia Johnson. The two lived together, or close to each other, in Mississippi, though they could not legally marry at the time (the late 1800s). The couple was buried side by side.

Morgan’s maternal grandfather was Jacob Isiah Revere (the son of Daniel Revere and Riller). Jacob was born in Florida.

Morgan’s maternal grandmother was Lenora Greenlee (the daughter of Samuel Greenlee and Elizabeth/Betty Carr). Lenora was born in Mississippi. Elizabeth was the daughter of Alfred Carr and Celia/Celie Johnson.

A DNA test whose results were displayed on the show African American Lives 2 (2008) stated that Morgan’s genetic ancestry is:

In his 2009 book about the show, In Search of Our Roots: How 19 Extraordinary African Americans Reclaimed Their Past, Henry Louis Gates, Jr. wrote that 75% of Morgan’s African DNA matches the Congo-Angola region, and 25% matches the Upper Guinea region, including the Shong and Tuareg people. On his father’s side, his DNA has matches with Igbo (Nigerian) ancestry.