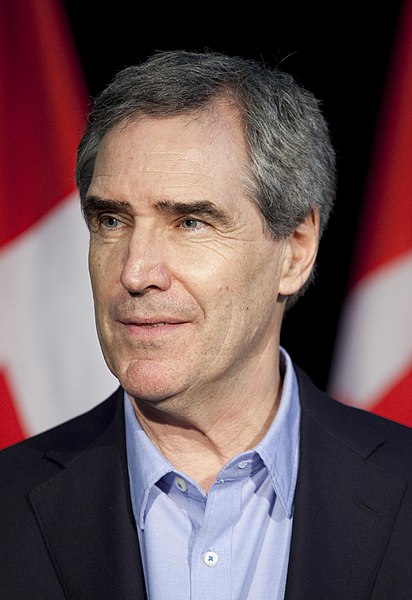 Michael Ignatieff is a Canadian author, academic, and politician. He has been President and Rector of the Central European University, since September 1, 2016. He was previously Leader of the Liberal Party of Canada, from December 10, 2008 to May 25, 2011, and, as such, served as Leader of the Opposition in the Canadian Parliament, from December 10, 2008 to May 2, 2011.

Michael is the son of Jessie Alison (Grant) and George Ignatieff (George Pavlovich Ignatieff), a diplomat.

His father was born in Saint Petersburg, in the Russian Empire. Michael’s father’s family left Russia after the 1917 Russian Revolution, living in France and then Canada. Michael’s mother was Canadian-born, and was of Scottish and English descent. Michael’s uncle (mother’s brother) was philosopher, professor, and political commentator George Grant (George Parkin Grant). Michael was raised Russian Orthodox.

Michael is married to Zsuzsanna Zsohar, who is from Hungary. He has two children with his former wife, Susan Barrowclough.

Michael’s paternal grandfather was Paul Ignatieff (Count Pavel Nikolayevich Ignatiev, the son of Nikolay Pavlovich Ignatyev and Ekaterina Leonidovna Golitsina/Golicyna). Michael’s grandfather Count Pavel was born in Constantinople, Ottoman Empire, and was a Russian politician, who served as Education Minister of the Russian Empire, from January 9, 1915 to December 27, 1916. Michael’s great-grandfather Nikolay was a statesman and diplomat, who was the son of Captain Pavel Nikolayevich Ignatyev and Maria Ivanovna Maltsova. Ekaterina was the daughter of Leonid Mikhailovich Golitsyn and Anna Matveevna Tolstaya.

Michael’s maternal grandfather was William Lawson Grant (the son of The Rev. George Monro Grant and Jessie Lawson). William was born in Halifax, Nova Scotia, Canada. The Rev. George was a Presbyterian minister, writer, and political activist, who was the son of James Grant. Jessie was the granddaughter of William Lawson, the first president of the Bank of Nova Scotia.

Michael’s maternal grandmother was Maude Erskine Parkin (the daughter of Sir George Robert Parkin and Annie Connell Fisher). Maude was born in Fredericton, New Brunswick, Canada. Sir George was an educator, imperialist, and author, who was the son of John Parkin, who was born in Middleton-in-Teesdale, County Durham, England; and of Elizabeth Mclean. Annie was the daughter of William Fisher and Charity Ann French.