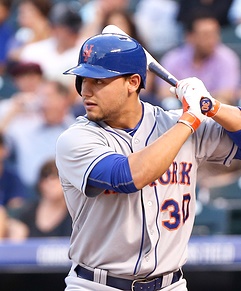 Conforto in 2015, photo by Debby Wong/Bigstock.com

Michael Conforto is an American professional baseball player. He is an outfielder for the New York Mets of Major League Baseball (MLB). He is nicknamed “Scooter.”

Michael’s paternal grandfather is Louis Conforto (the son of Anthony/Antonio Conforto and Maria/Marriuccia Fatigante). Louis was born in Pennsylvania, to Italian parents. Antonio was born in San Nicandro Garganico, Puglia, the son of Luigi Mason Conforto and Celestina Stighane. Maria was born in Polla, Campania, the daughter of Nicola Fatigante and Maria Francesca Curcio.