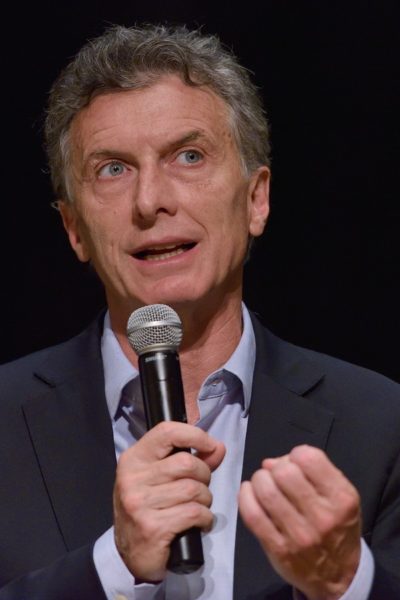 Macri in 2015, photo by antvlk/Bigstock.com

His father, Francisco Macri, was an Italian-born businessperson, who was born in Rome. His mother, Alicia Beatriz Blanco Villegas, is Argentine, of Spanish (including Cantabrian) descent. Mauricio is married to businessperson Juliana Awada. He has three children with his former wife Ivonne Bordeu, and a daughter with Juliana. Ivonne is the daughter of race car driver Juan Manuel Bordeu.

Mauricio’s maternal grandfather was Debilio Zacarías Blanco Villegas (the son of Manuel Blanco Suárez and Adela Villegas). Debilio was born in Ramallo, San Nicolás Partido, Buenos Aires Province, Argentina. Manuel was a Spanish emigrant, and was the son of José Blanco and Josefa Suárez. Adela was the daughter of a Spanish emigrant, Casiano Villegas, of Santander, Cantabria, and of Juana Leandra Centurión.

Mauricio’s maternal grandmother was Argentina Cristina Cinque Barletta (the daughter of Antonio Cinque and Giuseppa, or Juana in Spanish, Barletta). Argentina was born in Tandil, Tandil Partido, Buenos Aires Province, Argentina. Antonio was an Italian emigrant, and was the son of Vincenzo (or Vicente in Spanish) Cinque and Candida (or Cándida in Spanish) Castellucci. Giuseppa was also an Italian emigrant, and was the daughter of Leonardo Barletta and Carmen Filomeno.