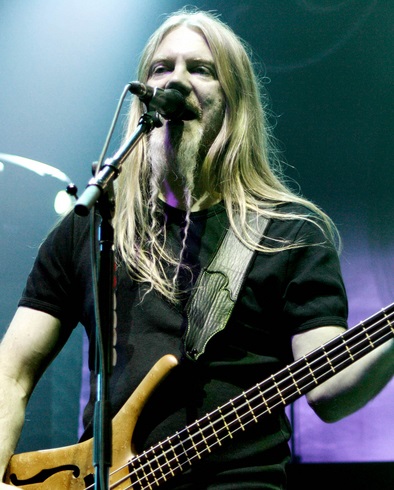 Marco Hietala is a Finnish musician. He is the bassist of the Finnish symphonic metal band Nightwish. Other members of the band are Troy Donockley, Tuomas Holopainen, Floor Jansen, Jukka Nevalainen, Anette Olzon, Tarja Turunen, Sami Vänskä, and Emppu Vuroinen.

Marco is the son of Arja (Taskinen) and Harry Holger “Harri” Hietala. He has two children with his former wife Manki.

Marco’s paternal grandfather was Harry Holger Hietala (the son of Karl Valerius Hietala and Alma Maria Rask). Harry was born in Vaasa. Alma was of Swedish descent, and was the daughter of Johan Jakobsson Rask and Maria Johanna Glasberg.

Marco’s paternal grandmother was Margit Maria Kajaste (the daughter of Herman Gajewski Karila, later Kajaste, and of Lahja Martta Maria Ikonen). Margit was born in Vaasa. Herman was the son of Alekais Pettersson Gajewski Karila, who was of Karelian descent, and of Maria Johanna Strömfors. Lahja was of Karelian descent, and was the daughter of Antero Juhonpoika Ikonen and Liina/Akilina Hodijeva.