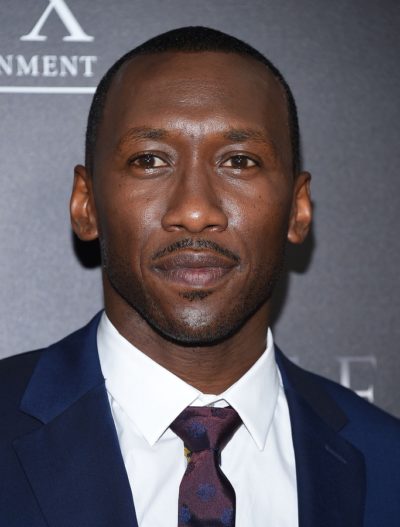 Ali in 2016, photo by DFree/Bigstock.com

Mahershala Ali is an American actor and rapper. He has twice won the Academy Award for Best Supporting Actor, for Moonlight (2016) and Green Book (2018). He is the first Muslim male to have won an acting Oscar. He is also known for his roles in The 4400, House of Cards, True Detective, The Hunger Games franchise, and Spider-Man: Into the Spider-Verse, among many others. He has also been credited as Mahershalalhashbaz Ali, Mahershala Karim-Ali, and Hershal Gilmore.

He is the son of Willicia (Goines) and Phillip Fredick Gilmore. He is named after Maher-shalal-hash-baz, the second mentioned prophetic-name child in Isaiah ch.7-9. The name means “Hurry to the spoils!” or “He has made haste to the plunder!” He was raised in Hayward, California.

Much of his ancestry is rooted in Texas. He was raised Christian by his mother, a Baptist minister. He later converted to Ahmadiyya Islam. This is a revivalist movement within Islam. He changed his surname from Gilmore to Ali. Mahershala is married to Amatus-Sami Karim, with whom he has a daughter.

My mother is an ordained minister, I’m a Muslim. She didn’t do backflips when I called her to tell her I converted 17 years ago. But I tell you now, you put things to the side. And I’m able to see her, and she’s able to see me. We love each other and the love has grown. And that stuff is minutia. It’s not that important.

Mahershala’s patrilineal line can be traced to John Gilmore, who was born, c. 1834, in North Carolina.

Mahershala’s paternal grandfather was Clarence Hugh Gilmore (the son of Payne Gilmore and Bertha V. Owens). Clarence was born in Texas. Payne was the son of Wallace D. Gilmore and Eglon Ards Taylor. Bertha was the daughter of Moses/Mose S. Owens and Nora Alice McCoy.

Mahershala’s maternal grandmother was Evia Mae “Evie” Smith (the daughter of Pervy Lee Smith and Gertha/Girtha Poe). Evia was born in Kentucky, and was an ordained minister at Hayward Baptist Church. Gertha was the daughter of Tony/Toney J. J. Poe and Savanah/Savannah Smith.