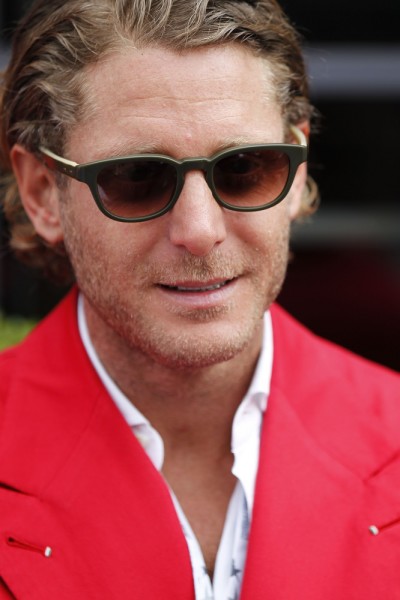 Elkann in 2011, photo by Prphotos.com

Lapo Elkann is an Italian entrepreneur. He is the the brother of industrialist John Elkann, the current Chairman of FCA (Fiat Chrisler Automobiles).

Lapo is the son of Italian parents, Alain Elkann, a novelist, intellectual, and journalist, and Margherita Agnelli, a member of the powerful Agnelli family. His sister is film director Ginevra Elkann. His father is Jewish and his mother is Catholic. He has said, “[I’m] proud of my Jewish roots.”

Lapo’s paternal grandfather was Jean-Paul Elkann (the son of Armand Elkann and Berthe Bloch). Jean-Paul was a French banker, born in Paris, France, to an Alsatian Jewish family. Armand was the son of Isaac Elkann and Marie Anne Dreyfuss.

Lapo’s paternal grandmother was Carla Ovazza (the daughter of Vittorio Camillo Ovazza and Olga Cinci Fubini). Carla was an Italian Jew. She was a member of the influential Ovazza banking family, based in Turin. Vittorio was the son of Ernesto Ovazza and Celeste Malvano. Olga was the daughter of Alessandro Fubini and Albina De Benedetti.

Lapo’s maternal grandfather was famous industralist Giovanni “Gianni” Agnelli (the son of Edoardo Agnelli and Princess Virginia Bourbon Del Monte di San Faustino). Lapo’s grandfather Gianni was born in Turin, Italy, and was a Senator for Life, from 1991 to 2003. Edoardo was a prominent businessperson, and was the son of Giovanni Agnelli and Clara Boselli. Lapo’s great-grandmother Princess Virginia was the daughter of Carlo Bourbon del Monte, 4th Prince of San Faustino, and of New Jersey-born Jane Allen Campbell, who herself was the daughter of George W. Campbell, Jr. and Virginia Watson. George’s father, Lapo’s great-great-great-great-grandfather George W. Campbell (George Washington Campbell), was born, c. 1769, in Lairg, Sutherland, Scotland, and was a U.S. Senator from Tennessee, from 1811 to 1814, and again from 1815 to 1818, the U.S. Secretary of the Treasury, in 1814, and the U.S. Minister to Russia, from 1819 to 1820, among other duties.

Sources: Genealogy of Lapo Elkann (focusing on his father’s side) – http://www.geni.com

Genealogy of Lapo Elkann (focusing on his mother’s side) – http://www.geni.com