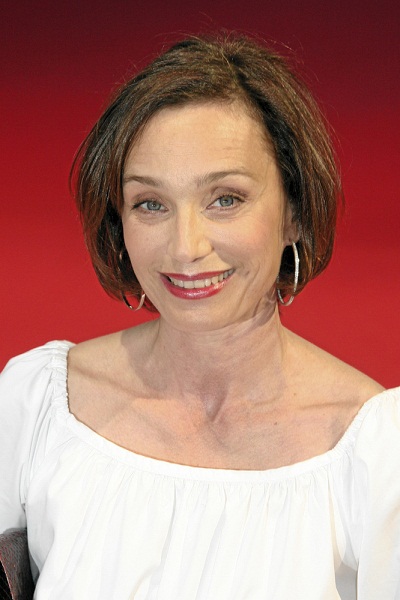 Scott Thomas in 2007, photo by PrPhotos

Kristin Scott Thomas is a British-born actress. She received an Academy Award nomination for her role in The English Patient (1996). Her sister is actress Serena Scott Thomas (Serena Harriet Scott Thomas).

Kristin spent much of her childhood at Trent, Dorset, England. Kristin’s father, Lieutenant Commander Simon Scott Thomas, was a pilot for the Royal Navy’s Fleet Air Arm, and died in a flying accident when Kristin was five. Kristin’s father had English, Welsh, and one eighth Dutch, ancestry. Kristin is the niece of Admiral Sir Richard Thomas (who was a Black Rod in the House of Lords), and a more distant great-great-niece of Captain Robert F. Scott, the ill-fated explorer who lost the race to the South Pole.

Kristin has three children with her former husband, French obstetrician and gynaecologist François Olivennes, whose own father was psychiatrist and poet Armand Olivennes (originally Armand Olievenstein). Kristin is fluent in French, and has French citizenship. She was awarded an OBE (Order of the British Empire) in 2003, and was made a Chevalier of the Légion d’honneur by the French government in 2005.

Kristin’s paternal grandfather was Commander William Richard Scott Thomas, DSC, RN (the son of William Thomas and Elizabeth M.). Kristin’s grandfather William was Welsh, and was born in St. Asaph, Denbighshire, Wales, to a Welsh-born father and to an English-born mother.

Kristin’s paternal grandmother was Mary Hilda Bertha “Maimie” Hemelryk (the daughter of Lieutenant Colonel George Edward Hemelryk and Elizabeth Mary Smith). Kristin’s grandmother Mary was born in Alberta, Canada, to English parents. George was the son of Paulus Eduardus/Eduard/Edward Jospehus “Paul” Hemelryk, who was of Dutch origin, and of Caroline Bertha Hampshire, who was English, from Liverpool, Lancashire. Kristin’s great-grandmother Elizabeth was English, the daughter of William Smith and Ellen Verity.

Sources: Genealogy of Kristin Scott Thomas (focusing on her father’s side) – https://www.geni.com