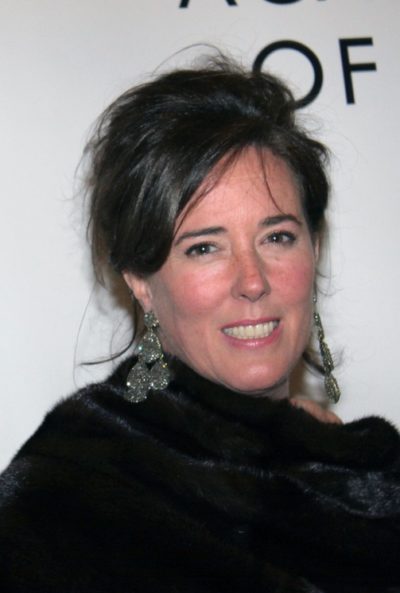 Ethnicity: Irish, as well as one eighth French

Kate Spade was an American fashion designer and businessperson. She was also known under the name Kate Valentine.

Kate was born in Kansas City, Missouri, the daughter of June Therese/Theresa (Mullen) and Earl Francis “Frank” Brosnahan, Jr. Her niece (brother’s daughter) is actress Rachel Brosnahan. Kate was married to entrepreneur Andy Spade, until her death. The couple have a daughter. Andy’s brother is comedian and actor David Spade.

Kate’s paternal grandmother was Helen Rose Mottin (the daughter of Leger Nicholas Mottin and Katherine/Catherine Margaret “Munnie” Roache/Roche). Helen was born in Kansas. Leger was the son of Leger Nicholas Mottin, who was French, and of Mary Jane Desalme, who was born in Missouri, to French parents. Kate’s great-grandmother Katherine Roache/Roche was the daughter of Michael Romanus Roache and Margaret Josephine Kanelly, who were originally from Midleton, County Cork, Ireland.

Kate’s maternal grandfather was named John A. V. Mullen (the son of Bernard Mullen and Mary). John was born in Pennsylvania.

Kate’s maternal grandmother was named Theresa/Terese O’Flanigan/O’Flanagan (the daughter of Frank O’Flanagan and Mary). Theresa was born in Kansas.

Genealogy of Kate Spade (focusing on her father’s side) – http://www.genealogy.com