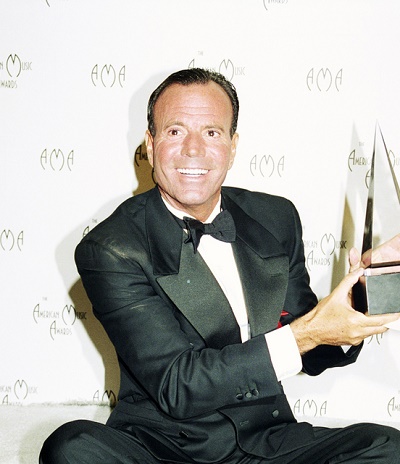 Iglesias in 1998, photo by Prphotos.com

Julio Iglesias is a Spanish singer and songwriter.

He is the son of Julio Iglesias Puga and María del Rosario de la Cueva y de Perignat. His father was born in Ourense, Galicia, Spain, and was a prominent gynecologist. He is married to Dutch model Miranda Rijnsburger. He has five children with Miranda, and three children, including singer, songwriter, and actor Enrique Iglesias, with his former wife, Filipino-born journalist, socialite, and television host Isabel Preysler.

The surname Iglesias is Spanish for “churches.” Julio’s paternal ancestry comes from Galicia. Julio has stated that he has, or that he thinks he has, some degree of Sephardi Jewish ancestry on his mother’s side. It is not clear if this ancestry has been documented/verified. Julio’s recent ancestors were not Jewish. Julio’s mother’s surname, de la Cueva y Perignat (literally “of the cave”), referring to Jewish people in hiding, is evidently a common Jewish name.