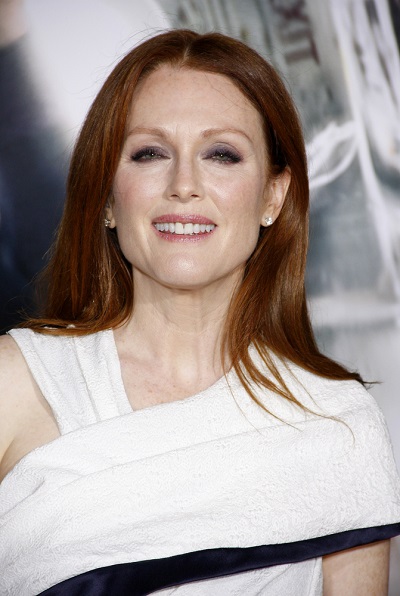 Julianne Moore is an American actress and writer. She won the Academy Award for Best Actress for Still Alice (2014). She has also starred in The Hours, Far from Heaven, The Kids Are All Right, The Lost World: Jurassic Park, and Hannibal, among many other films.

Her mother, Anne McNeil (Love), was Scottish, from Greenock, and moved to the U.S. in 1951. Her father, Peter Moore Smith, a colonel and military judge, was born in New Jersey. Her father has German [including Alsatian], as well as Irish, English, Welsh, and one eighth Ashkenazi Jewish, ancestry. Julianne applied for British citizenship in 2011, to honor her late mother. Julianne’s brother is author Peter Moore Smith.

Julianne is married to director, writer, and producer Bart Freundlich, with whom she has two children.

Julianne’s paternal grandfather is Charles Edward Smith, Jr. (the son of Charles Edward Smith and Bertha May Roberts). Julianne’s grandfather Charles was born in Pennsylvania. Julianne’s great-grandfather Charles was the son of Peter Moore Smith and Magdalena/Magdeline/Margaret/Maggie Lincks, who was the daughter of Alsatian German parents, Johannes Fredrick Lincks and Mary Salome Haushalter, from Departement du Bas-Rhin. Julianne’s great-grandmother Bertha was the daughter of Lewis/Louis Powell Roberts, whose parents were Welsh, and of Amanda Elizabeth Crone, who was of German descent.

Julianne’s maternal grandmother was Flora McMillan McLean (the daughter of Norman McLean and Annie McNeil/McNeill). Flora was born in Greenock, Renfrewshire, Scotland. Norman was the son of Angus McLean and Flora Reid.

A DNA test whose results were displayed on the show Finding Your Roots with Henry Louis Gates, Jr. (2016) stated that Julianne’s genetic ancestry is: