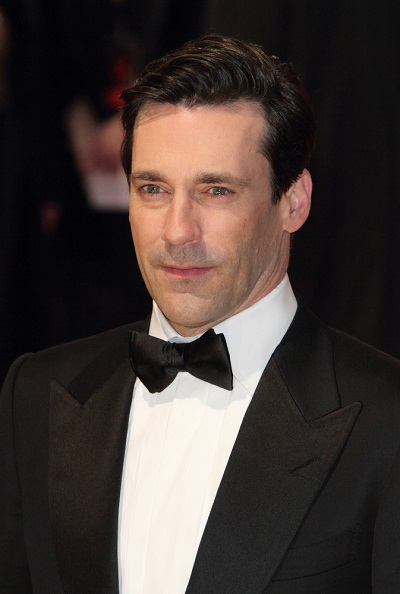 Jon Hamm is an American actor, director, and producer. He has starred in the films The Town, Million Dollar Arm, Baby Driver, and Bad Times at the El Royale, and the show Mad Men, among many other works.

He is the son of Deborah Jean and Daniel Leonard Hamm. He has established the Deborah Garner Hamm Memorial Scholarship at his mother’s alma mater, John Burroughs School.

Jon’s paternal grandfather was Leonard Edward Hamm (the son of Daniel Hamm and Mildred Theresa Sullivan). Leonard was born in Missouri. Daniel was born in Missouri, the son of German parents, Leonhard Julius Hamm and Franziska/Francis/Frances K. Gutmann/Guttman/Gatmann. Mildred was born in Illinois, of Irish descent, the daughter of Michael Sullivan and Ellen “Nellie” Magner.

Jon’s maternal grandfather was William Joseph Garner (the son of Carl Burdett/Burdette Garner and Mary Louise Burch). William was born in Illinois. Carl was the son of Robert Anson Garner and Sarah Ann/Anna Dickson. Mary Louise was the daughter of William Roderick Burch and Mary A. Stephenson.

Genealogy of Jon Hamm (focusing on his father’s side) – https://www.geni.com