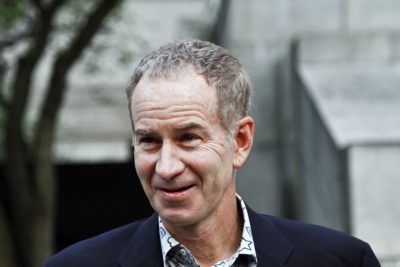 McEnroe in 2010, photo by vonora/Bigstock.com

He was born in Wiesbaden, Germany, to American parents, Katherine “Kay” and John Patrick McEnroe, Sr. He was raised in Douglaston, Queens, New York City.

He has five children, two with his wife, rock singer Patty Smyth, and three with his former wife, actress Tatum O’Neal.

John’s maternal grandfather was named William J. Tresham (the son of Vincent J. Tresham and Katie). William was born in Kansas, to English-born parents. Katie’s mother was born in Ireland.

Genealogies of John McEnroe (focusing on his mother’s side) – http://gw.geneanet.org
http://wc.rootsweb.ancestry.com