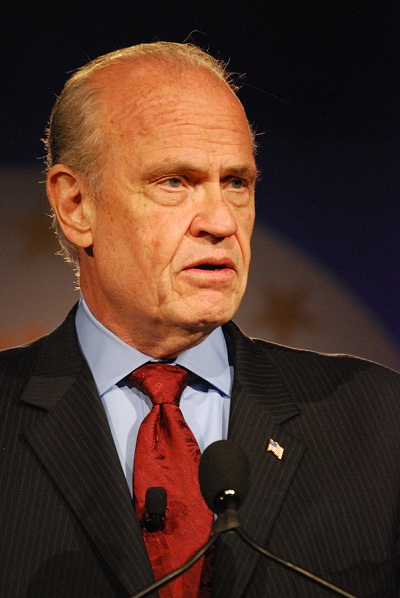 Fred Thompson, also credited as Fred Dalton Thompson, was an American actor, politician, lawyer, lobbyist, writer, and radio personality. A Republican, he served as a U.S. senator from Tennessee, from December 2, 1994 to January 3, 2003.

Fred was the son of Ruth (Bradley) and Fletcher Session Thompson. Most of Fred’s recent ancestors were Southern-born. He had English, some Scottish, and distant Dutch, ancestry. He was married to radio show host and columnist Jeri Kehn Thompson, until his death. The couple had two children. He also had three children with his former wife, Sarah Elizabeth (Lindsey).

Fred’s paternal grandmother was Gertrude/Gertie E. Allen (the daughter of William Jerry Allen and Sarah Elizabeth Richardson). Gertrude was born in Alabama. William was the son of Bluford Turner Allen and Amanda VanPelt Stewart. Sarah was the daughter of David Jackson Richardson and Cynthia Malinda Tays.

Fred’s maternal grandmother was Katherine/Catherine Edith Sealy (the daughter of Charles F. Sealey and Ada A. Coffee). Katherine was born in Tennessee. Charles was the son of Sam Sealy and Izeboela Annie McCormick. Ada was the daughter of Martin C. Coffee and Nancy Jane Foster.