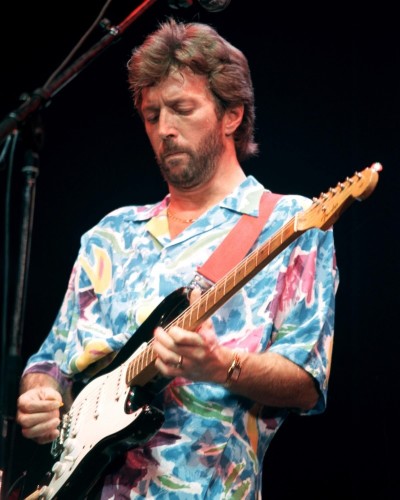 Eric Clapton is an English blues and rock guitarist, singer, and songwriter. He is considered one of the most influential guitarists of all time. He has been a member of the bands The Yardbirds, with Jeff Beck and Jimmy Page; John Mayall & the Bluesbreakers; Cream; Blind Faith, with Steve Winwood; and Derek and the Dominos, among others.

He is the son of Patricia Molly Clapton, a 16-year-old English woman, and Edward Walter Fryer, a 25-year-old soldier from Montréal, Québec. Edward shipped off to war prior to Eric’s birth and then returned to Canada. Eric grew up with his grandmother, Rose, and her second husband, Jack Clapp, who was stepfather to Patricia Clapton and her brother Adrian. Eric believed that they were his parents and that his mother was actually his older sister. The similarity in surnames gave rise to the erroneous belief that Eric’s birth surname is Clapp (Reginald Cecil Clapton was the name of Rose’s first husband, Eric Clapton’s maternal grandfather). Eric’s mother later married another Canadian soldier and moved to Germany, leaving young Eric with his grandparents in Surrey.

Eric has had five children. The death of his son Conor inspired Eric’s song Tears in Heaven. Eric is married to Melia McEnery.

Eric’s maternal grandmother was Rose Amelia Mitchell (the daughter of John Mitchell and Edith Miriam Lawrence). Rose was born in Berkshire, England. John was the son of Timothy Mitchell and Ann Gregory. Edith was the daughter of Richard Lawrence and Susan Clements.

Genealogies of Eric Clapton (focusing on his mother’s side) – http://gw.geneanet.org
http://www.geni.com
http://wc.rootsweb.ancestry.com