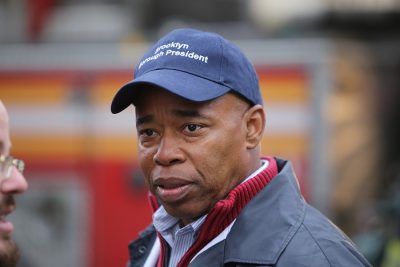 Adams in 2015, photo by andykatz/Bigstock.com

Eric Adams is an American politician, author, and police officer. A member of the Democratic Party, he has been Mayor of New York City, since January 1, 2022. He was previously Borough President of Brooklyn, from January 1, 2014 to December 31, 2021. He is the second African-American to serve as Mayor of New York.

Eric was raised in Bushwick, Brooklyn and South Jamaica, Queens. His parents were from Alabama. His father was a butcher, and his mother, Dorothy Mae Adams-Streeter, a housecleaner. He has a son with his former partner Chrisena Coleman.