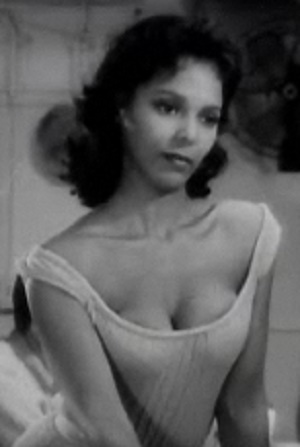 Dandridge in screenshot from trailer for ”The Decks Ran Red”, 1958

Dorothy Dandridge was an American actress, singer, and dancer. She was known for her films Carmen Jones, Tamango, Porgy and Bess, and many more. She was one of the first black actresses to be successful in Hollywood.

Her father, Cyril H. Dandridge, was a minister and cabinetmaker, born in Ohio. Her mother, Ruby Dandridge (born Ruby Jean Butler), born in Wichita, Kansas, was an actress from 1900 until the 1950s.

Dorothy was the sister of actress, dancer, and singer Vivian Dandridge. She had a daughter with her former husband, dancer and entertainer Harold Nicholas, of the Nicholas Brothers.

Dorothy’s parents were both black, and she also had some English ancestry.

Dorothy’s paternal grandfather was named James Henry Dandridge (the son of Albert Dandridge and Edwina). James was born in Canada.

Dorothy’s paternal grandmother was Florence Jessie Locke (the daughter of John/Joshua Locke and Ellen Johnson). Florence was born in Canada. John was born in England. Ellen was born in Kentucky.

In her autobiography, Everything and Nothing: The Dorothy Dandridge Tragedy, 1970, co-written with Earl Conrad, Dorothy stated that her mother had Jamaican, Mexican, and Native American ancestry. It appears that these statements were inaccurate.