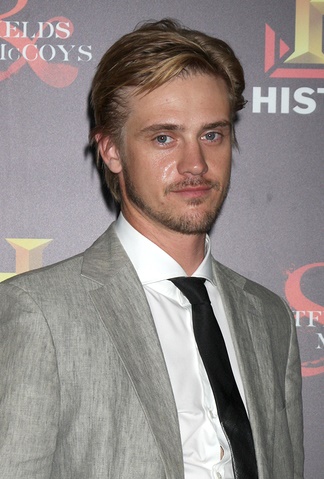 Boyd Holbrook is an American actor and model. His roles include Logan, The Predator (2018), A Walk Among the Tombstones, Run All Night, In the Shadow of the Moon, and Hatfields & McCoys. He has also been credited under his full name, Robert Boyd Holbrook.

He is married to Tatiana Pajkovic, with whom he has one child. Tatiana is Danish.

Boyd’s maternal grandfather was Robert Eugene Harris (the son of James Estill Harris and Lovata Helen Herald). James was the son of John “Bud” Harris and Florence B. Burchett, who were from Kentucky. Lovata was the daughter of Buress W. Herald and Fannie Williamson, who were also from Kentucky.

Sources: Genealogy of Boyd Holbrook (focusing on his father’s side) – https://www.geni.com

Genealogy of Boyd’s father (focusing on his own father’s side) – http://worldconnect.rootsweb.ancestry.com