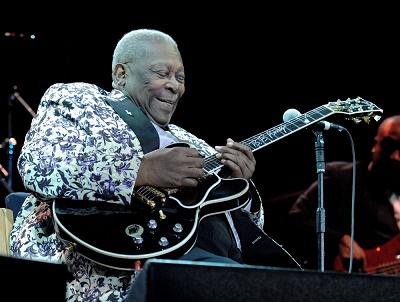 B.B. King was an American singer, songwriter, guitarist, and record producer. He played an influential style of soloing, based on fluid string bending and shimmering vibrato.

He born in Berclair, Mississipi, to African-American parents, Nora Ella (Pulley) and Albert King. B.B. was married to Martha Lee Denton and Sue Carol Hall. He has been said to have had fifteen children.

B.B.’s paternal grandfather was Fredrick Douglas King (the son of Jeff King and Easter Kimble). Easter was the daughter of Soloman Kimble and Nancy.

B.B.’s maternal grandmother was named Elnora Davidson (the daughter of Pompey Davidson and Emily Jane). Elnora was born in Mississippi. Pompey was the son of Harry Davidson and Manervia Chandler.